The Kimbrough Brothers: David Kimbrough, Kent Kimbrough and Robert Kimbrough Sr., will be recording a full CD together for the first time ever. This is a huge deal and further help to continue their father’s Cotton Patch Soul Blues sound. The session will take place in an unspecified Shack at the Shackdale in Clarksdale, Mississippi during the weekend of the Deep Blues Fest.

If you have ever been north of Clarksdale, MS and south of Memphis, TN, you have likely witnessed these brothers performing together and if you’ve been around long enough, you have seen them play with their father early on. They were featured in the 2007 Living Blues issue focusing on all the great North Mississippi artist that carry the torch of their forefathers. You can usually catch them any given Saturday or Sunday evening playing outside, in front of Robert Kimbrough, Sr.’s house in Ashland, MS, much like the parties Junior Kimbrough threw every weekend.

This CD will no doubt be on regular rotation on your preferred music devices.

This is produced and captured by ReverbUnit Records, a new label with an unorthodox approach to helping great musicians put out great music.

The Kimbrough Brothers Doing It Up at the 2017 Cotton Patch Blues Fest. 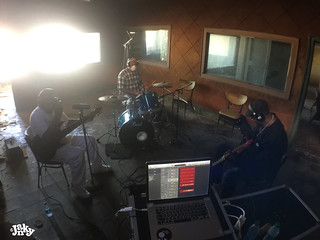